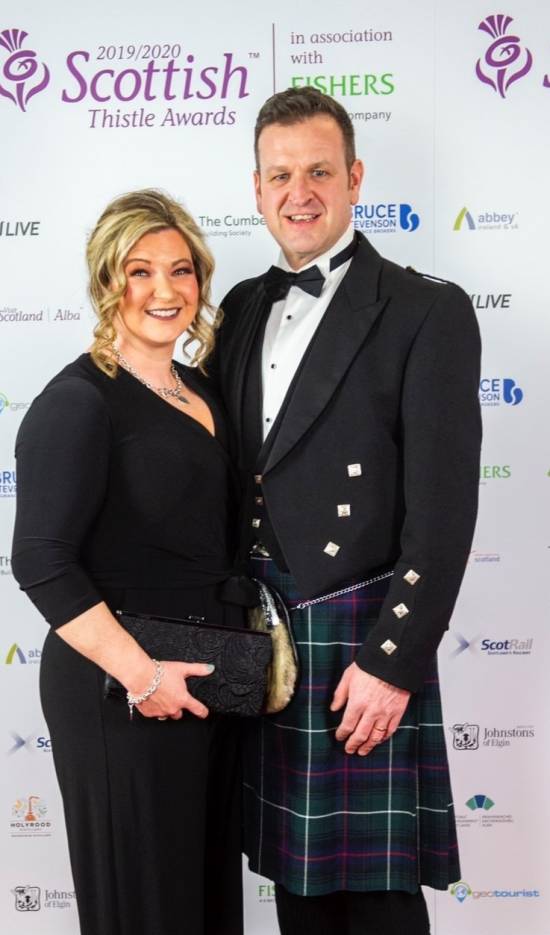 slay and Jura Marketing Group is run by a dedicated committee – all volunteers who give their time to champion what we have to offer on these islands and to ensuring your voice, as businesses in the tourism sector, is heard.

We thought you’d like to know a little more about the members who give their free time to running and developing IJMG.

Emma Clark – Co-chair
Co-Chair of Explore Islay and Jura and Vice Chair of Argyll and the Isles Tourism Committee. Emma (pictured with husband Graeme) is an islander having been born and raised here on Islay and brought up at Bunnahabhain and then later at the South of the island. Emma studied for a degree in nursing at Robert Gordon University in Aberdeen from 1995 and then in 1998 studied Hospitality Management in Glasgow for three years. Emma then started working in 2001 for a Japanese Pharmaceutical Company and spent 12 years in Brand Marketing and Sales. In 2003 Emma and her husband Graeme returned to Islay and now run the Five Star Glenegedale House. Her passion for tourism and making sure the visitor experience to Islay and Jura is the best it possibly can be, while ensuring it has a positive impact on our community, is always key to her drive. You can usually find Emma either immersed in her work, baking, representing Islay and Jura’s tourism sector somewhere or out exploring our beautiful islands.

Iain Hamilton – Co-chair
Iain was raised on Islay and returned to the island in 2018 with his young family to take up the position of General Manager at The Machrie. He joined the committee last year as Co-Chair with Emma.
Prior to this role at The Machrie, Iain has spent four years managing the four-star Loch Lomond Arms Hotel where he oversaw extensive refurbishments to the hotel’s guest rooms, kitchen, lounge areas and bar. He has also held the role of General Manager at two four-star boutique hotels – Duisdale and Toravaig – on the Isle of Skye and was Deputy General Manager at Auchrannie Resort on the Isle of Arran overseeing the operation of the resort’s two hotels, two leisure clubs, spa and 30 lodges.
Iain has won notable awards for his services to the hospitality industry including being awarded Regional General Manager of the Year for Lomond and Argyll three years in a row at the Scottish Hotel Awards and Highly Commended – Best General Manager at the Prestige Hotel Awards. Last year he led the team to scoop Golf Hotel of the Year and the Scottish Hotel of the Year – national winner!!

Dave Protherough – treasurer
Dave runs the guided kayak and fatbike tours at Kayak Wild Islay, has lived on the Isle of Islay since 2002 and has taken great delight in becoming part of the community. His passion is clearly outdoors and showcasing all the great views and wildlife that Islay can offer especially from the different perspective of the kayaks. He and his partner Emma enjoy the outdoors and walking their dog in the quiet and special parts of Islay.
His role on the committee is as the treasurer so look out for the next invoice for membership!

Jack Fleming
Jack first came to Islay in 1986 – and fell in love with the place then. In spite of that he left after nine years to expand his career – returning in 2005 to reclaim his heart! He was able to buy Loch Gruinart House – already a well-known B&B – to which he added a self-catering unit by converting what had been the original post office store room. His partner Catherine and he now run this as a team and they both delight in sharing what they know of the island with their guests. He has been involved with the Marketing Group since 2006, he is the immediate past chair (stepping down just pre-covid – how’s that for timing!) and says he’s now pleased to continue to serve on the committee. In his other job, he is the RSPB Scotland Area Manager for Argyll, Arran and Ardnamurchan stretching from the Argyll islands in the west to the western boundary of the Loch Lomond National Park. He says: ‘If there are better jobs in a better place I can’t imagine what or where!’

Vicky Mclean
Vicky relocated to Islay from Moray in 2007 and shortly after took up the post of Visitor Centre Manager at Laphroaig Distillery. She took up the opportunity to try something a wee bit different in 2019, and you can now find her at The Harbour Inn in Bowmore. The reason she joined the IJTMG was for the access to support from industry specialists and for the networking opportunities to understand developments in the Scottish tourism industry.

Graeme Clark
Graeme has over thirty years within the hospitality industry having studied hospitality management and then going onto working in hotel and restaurant management throughout Scotland. Graeme laterly worked for a large training provider delivering work-based qualifications within hospitality and retail. Graeme has owned and run the Five Star Gold Glenegedale house for over eight years. Graeme’s knowledge of the tourism industry and its inner workings as well as the islands ensure our industry is well represented. Graeme is usually found either working, renovating or walking and exploring Islay with his family and dog.

Paul Graham
Born on Islay (many, many years ago) Paul spent 27 years off the island working in Merchant Navy, then joined a hotel group which had 5 hotels/490 rooms. He moved into a sales role with Whyte & Mackay, was headhunted by Bass Brewers and worked in a sales and marketing role for 12 years. He was transferred to Interbrew after a buy-out, left in 2004 and bought a hotel which led to another B&B, a part time sales coaching role with Coors Brewers and then he bought the old Abbotsford Hotel in Bruichladdich. This was sold to Remy in 2017 and he has worked for Hunter Laing at Ardnahoe since. His role at Ardnahoe he describes as ‘very varied and incredibly interesting’.
Paul says: ‘My passions in life are of course my wife and lifelong friend Joan, our three dogs, rugby and golf. I only participate in golf now as the body is well past the rugby stage.’